Edith Stein was born in Breslau on the 12th of October of1891 as the eleventh child of Siegfried and Augusta Stein-Courant, who were well known as pious jews. Edith was a good student. After completing gymnasium she studied history, psychology and finally philosophy. 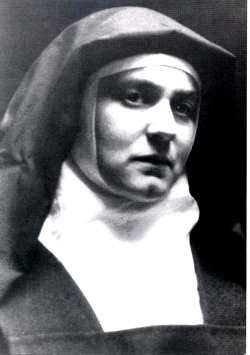 Other striking aspects in her rich life was teaching (in Breslau, Spiers and Munster).She found great help in the assistance of Professor Husserl and the practising of prayer. She possessed the charismatic gift to be able to listen, help and serve. Another outstanding point in her life was her inspiring conversion to the catholic belief after reading the autobiography of St. Teresia of Avila.

Edith was baptized on the1st of january 1922 in Bergzabern. For her Christian name she chose ‘Theresia’.On the14th October she found great peace within herself when she joined the Karmel of Cologne. She was the author of many books. In the Karmel of Echt she wrote one of her major great works ‘The science of the cross’. She worked hard to improve the position of women.

Edith Stein spent a considerable time inside the walls of the Karmel in the Bovenstestraat in Echt, namely from 31st December 1938 to the 2nd August 1942, the day when she and her sister Rosa were arrested by the Gestapo, deported and finally horribly gassed.

She died a martyr in the destruction camp at Auschwitz.The reason of this deportation was the reading out in churches of the pastoral writing from the Dutch episcopacy in which a powerful protest against persecution of jews came forward.

On the 1st May 1987 Karmelites Zr. Theresia Benedicta of the Cross (Edith Stein) was declared beatific by Pope John Paul II in Cologne. On the11th of October 1998 she was canonized by Pope John Paul II at Saint Peters Square in Rome. On this occasion a celebration took place on the 25th of October 1998 at the Landricus Church in Echt. After this celebration a silent parade took place through the streets of Echt, which finally ended at the Karmel where a great closing ceremony took place.

Living the concealed life and still experience the glory of the light. Being peaceful and nevertheless full of warmth (from Edith Stein H.Held)

Edith Stein
A Saint of today. 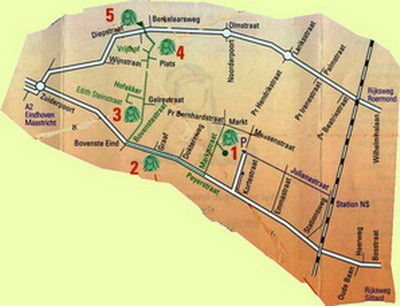 1. War Monument – City Hall
This monument is dedicated to all war victims of Echt including Edith and Rosa Stein. 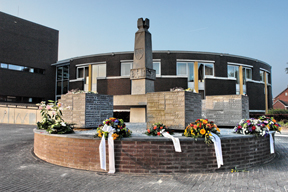 2. Memorial Tile- Peyerstraat
At house number 16 a memorial tile can be found on the pavement. From this spot Edith Stein and her sister Rosa were taken away by the Gestapo. We follow our journey in the direction of the Bovenstestraat. 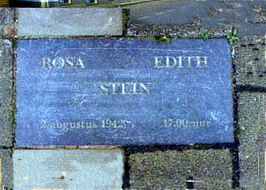 3. Karmel
The Karmel convent exists in the Bovenstestraat. The chapel is open daily. On the right hand side we pass the Gelrestraat. Directly afterwards on the left hand side we cross the road to the Hofakker. Upon arriving at the Harlindestraat we go left again and finally we reach the Edith Steinstraat. This street behind the convent is dedicated to Edith Stein. We return to the Bovenstestraat and follow the direction to the Plats/Vrijthof. 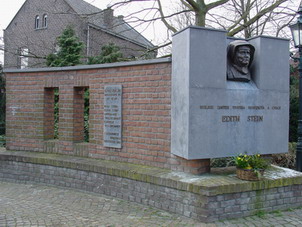 4. Saint Landricus Church
Reaching the church square we see the Edith Stein Monument.In the church we admire the two Edith Stein stained glass windows,  the triptych painting of Edith Stein in the church, and her original choir– robe. 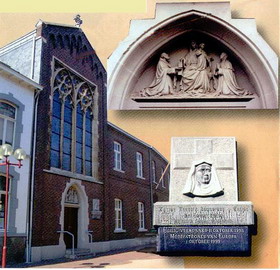 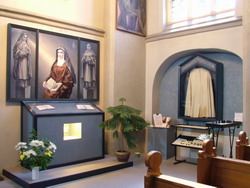 5. Edith Stein meeting centre “Cultuurhuis Edith Stein”
This is the end of our journey. Here , there is the possibility  of receiving guests, visiting the extensive library and a permanent exhibition of photographs. There is also a film about the life of Edith Stein.
The Edith Stein Meeting centre is opened every third Tuesday of the month between 9.00 and 12.00 h. and by appointment. 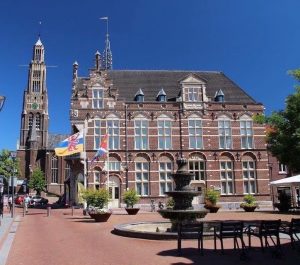 The Foundation Dr. Edith Stein Echt was visited by a group of pilgrims from Korea on Saturday 5 May 2018.
Our guided tour along the Edith Stein memorials was followed with great interest.
The Mayor of Echt- Susteren Drs. Jos Hessels welcomed the group with an appropriate speech, in which he spoke about peace in Korea.
The visit ended with a Eucharist celebration in the St. Landricus church. 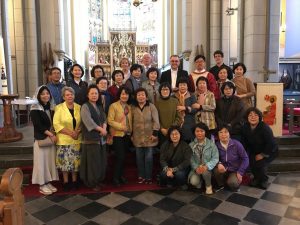 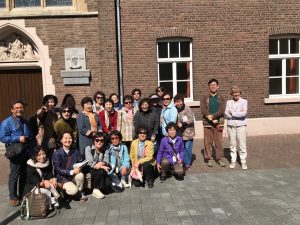 The Foundation Dr. Edith Stein Echt welcomed an American pilgrim group on Saturday, June 23rd.2018. The pilgrims came from different states of America. Because there is a regular demand for an English book about Edith Stein, the Foundation has translated into English the book “Living at the Lord’s hand” by Dr. Ilse Kerremans. The first books were bought and are on their way to America!

As you can see (at the bottom left of the photo), the skillful tour guide Olga was there again. Always a nice reunion with a big hug from her. 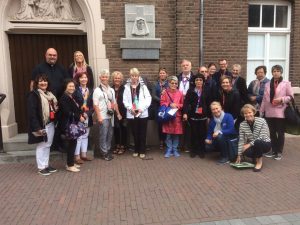 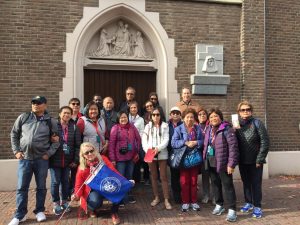 On Saturday 21 October 2017, the Foundation Dr. Edith Stein Echt NL received a group of pilgrims from New York, who followed the Edith Stein pilgrimage route with our guidance

Surprising was their great knowledge about Edith Stein and the interest in our explanations.
The tour ended with an Eucharist celebration in the H. Landricus and H. Edith Stein church 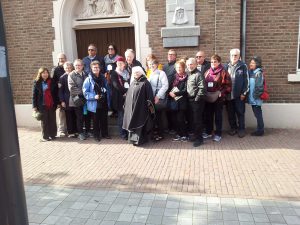 On October 7, 2016, we received a very enthusiastic and interested group of pilgrims of 21 persons coming from Colorado USA. After showing the DVD about the life of Edith Stein, several memorials in Echt were visited including the Carmelite Monastery and the Landricus Church. The tour was stylishly concluded by a Mass, celebrated by Father Joseph Brennan.
Father Brennan asked to get a message once the book by Ilse Kerremans has been translated into English, as well as a picture of the celebration of our 50th anniversary in June 2017

On October  22 th.  32 pilgrims from the USA ( Boston and California) and Italy visited us.

First of all we visited  the Karmel Convent with its chapel and the little room where Edith Stein has stayed sometimes.

Next we went to our “Meeting Centre Edith Stein” where we showed them the very interesting film of the life of Edith Stein.
Finally we visited the Landricus church  with the triptych painting of Edith and her original robe and the Edith Stein windows.

To summarize:  A visit of a enthusiastic and motivated group, which  gratefully said goodbye

On November 12 th. a group of  21 pilgrims  of CWOC  visited us  coming from Afcent Brunssum  and  Geilenkirchen. They are studying a book about the life of Edith Stein

Unfortunately the weather conditions were not so good; it was raining “ cats and dogs”

First of all we visited  the Karmel Convent with its chapel and the little room where Edith Stein has stayed sometimes.

Next we went to our “Meeting Centre Edith Stein” where we showed them the very interesting film of the life of Edith Stein. Finally we visited the Landricus church  with the triptych painting of Edith and her original robe and the Edith Stein windows.

To summarize:  A visit of a very nice,  inquisitive and modest  group, which  gratefully said goodbye 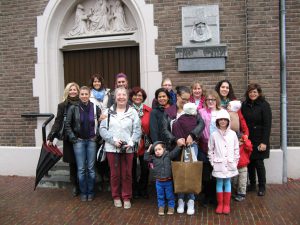 On September 18 th. 12 pilgrims ( including 2 fathers)  visited us  coming from the USA.

First of all we showed them the very interesting film of the life of Edith Stein.
After that we payed a visit to the Karmel Convent with its chapel and the little room where Edith Stein has stayed sometimes.
Finally we visited the Landricus church  with the triptych painting of Edith and her original robe.

To resume: A very nice, inquisitive, and modest group, which gratefully said goodbye. 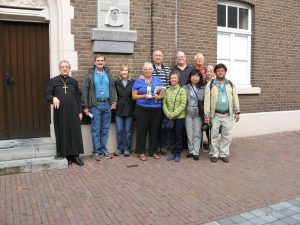 On May 13, 2013 9 pilgrims visited us  within their midst Priest Father David Meng and Anna Campbell OCDS, from the Diocese Arlington Virginia.

On behalf of the Foundation were present: Mrs. Henny Pustjens-v d Laak and Mr Frans Stassen and Ton van Vugt.

Under the motto: “In the footsteps of Edith Stein” we visited the Carmelite Convent with chapel and the special “Edith Stein”room, which made a deep impression on the visitors., after that  the memorial tile Peyerstraat, the Saint Landricus Church and finally the Edith Stein meeting centre.

Unfortunately more was not possible, given that it was only an hour set aside for this pilgrimage.

To sum up: A very nice, inquisitive, and enthusiastic group, who gratefully said goodbye and promised  to come again  to spend more time in Echt  and learn more about Edith Stein. 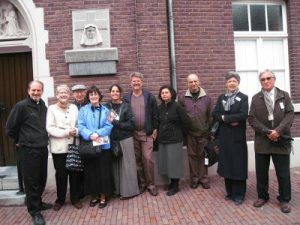